In recent years, the length and quality of cycle tracks has grown around the world. Cities try to reduce the presence of motor vehicles on their streets while promoting the use of bicycles. This has led to the construction of new cycle tracks that attract more cyclists every day.

But what must a bike path have to be attractive to cyclists? There are several aspects to take into account; the first of these is that it must be safe and at the same time convey a sense of security.

The fact that the cycle track is an on-street infrastructure prevents pedestrians from invading the lane when moving and does not compromise the space on the sidewalk, which is the pedestrian’s own space. It is clear that road bike lanes segregated from motor vehicle traffic, either continuously with a cordon or discontinuously with separating elements (bollards, medians, raised curbs, etc.), are perceived as safer by cyclists than a simple painted line on the road. Other elements that help the perception of safety is good bikeway signing and marking, both horizontal and vertical signage, such as bicycle traffic lights, which help both the user of the bicycle lane and motor vehicle drivers to make decisions in a safer way. Another aspect that also contributes to improving safety on bike lanes and the perception of this safety is the width, the wider the bike lane is perceived as more comfortable and safer. 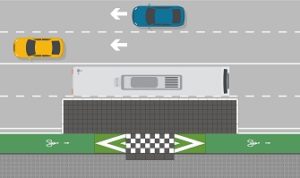 One aspect that also stands out is the way in which the conflict that occurs when a bike lane meets a bus stop is resolved. The safest solution is the one that extends the sidewalk towards the center of the road and creates an area shared by bicycles and bus users in which the latter have priority, as can be seen in this image.

The existence of a well-connected network of bicycle lanes with well-resolved intersections are other elements that add attractiveness to bike lanes and motivate citizens to move around the city by bicycle. Finally, other improvements that make a bike lane attractive are the bike boxes at traffic lights and the intersections between lanes designed as a protection area and exclusive access for bicycles.

At ZICLA we have developed a series of modular, scalable and reversible solutions to help cities improve safety on bike lanes by segregating them with separating elements such as the separators and planters of the Zebra® family and modules A and B of the Zipper® system. On the other hand, our Vectorial® system allows us to resolve the conflict that appears when a bike lane coincides with a bus stop by extending the sidewalk towards the center of the road and creating an area shared by cyclists and bus users.