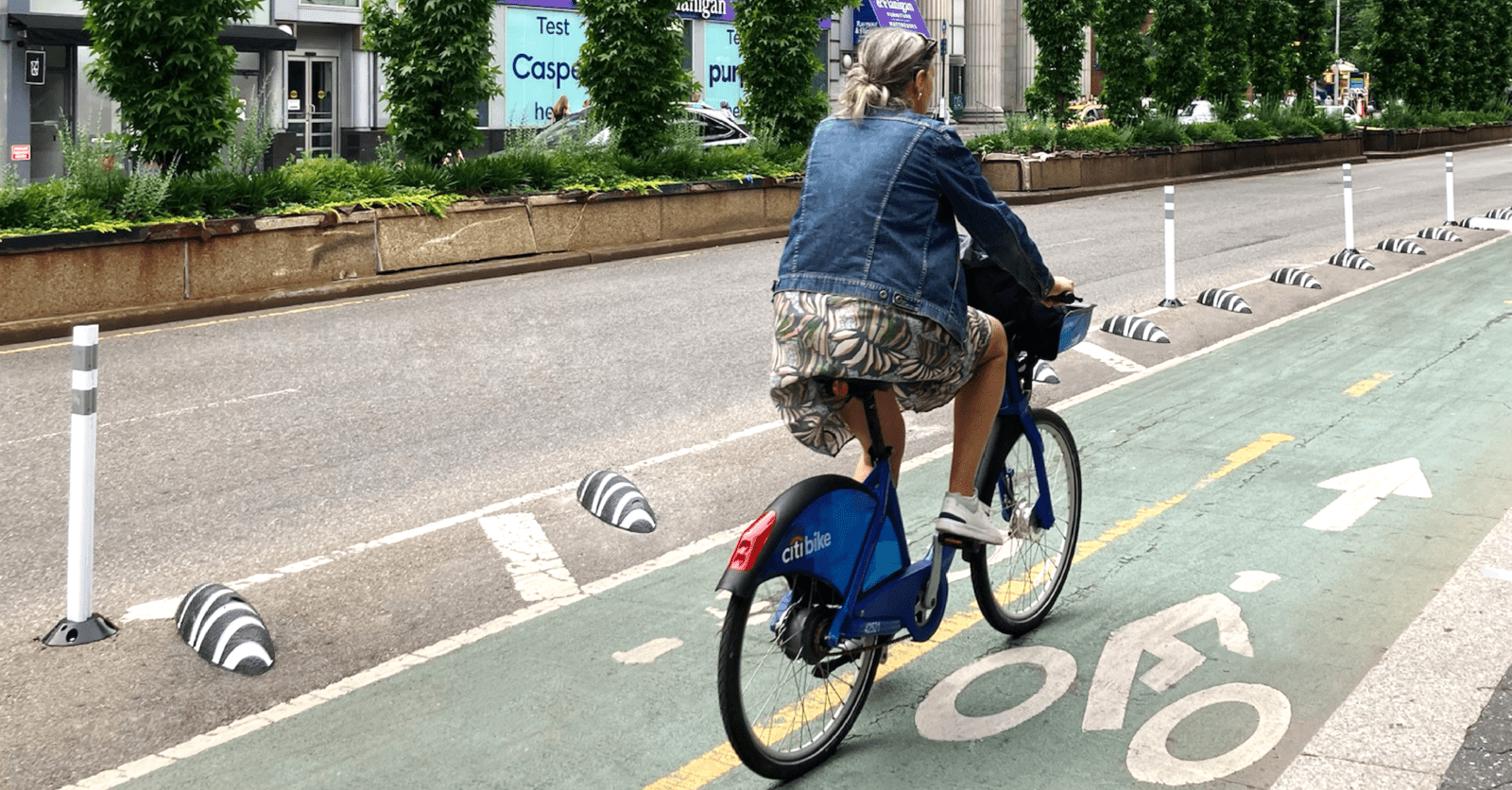 Many cities are making their streets quieter and creating a dedicated space for cyclists and other micromobility vehicles users with the aim of getting more people to replace their motor vehicles with more sustainable forms of transport.

Each case is different, depending on the city, street, engagement of the local community, modal share, etc. This means the infrastructure for bikes and micromobility vehicles must adapt to each scenario. Some of these infrastructures are described below.

A protected cycle lane is separated from motor traffic and from the pavement by cycle lane separators or another physical barrier. It provides a space to be exclusively or primarily used by bikes.

These are one-way protected bike lanes that can be combined with a parking lane, cycle lane separators or another barrier between the cycle lane, the motor vehicle lane, and the pavement.

Two-way protected bike lanes are segregated by a physical barrier, such as cycle lane separators, and allow for two-way traffic on one side of the road.

On one-way streets, it reduces the number of cyclists riding in the opposite direction to the traffic by providing a lane in which to do so safely.

Bike lanes in the opposite direction to motor vehicle traffic.

These cycle lanes enable users to travel in the opposite direction to road traffic. They turn a one-way street into a two-way street: one way for motor vehicles and bikes, the other way for bikes only. These types of lanes must run on the left of the road, so that cyclists ride on the right, and must be segregated by cycle lane separators or other physical barrier. It therefore:

In this case, the bike lane is located adjacent to a parking line and the parked vehicles act as a protective barrier between cyclists and traffic. A safety strip is always established to allow for the doors of cars parked in line to be opened without invading the cycle lane.

These are bike lanes that run along the middle of the road. They are normally protected from motor traffic by cycle lane separators or other physical barriers on either side of the cycle lane.

These cycle lanes are separated from motor vehicles, usually at an intermediate level between the road and the pavement. Raised bike lanes can be one-way or two-way. They therefore:

This type of cycle lane has no physical segregation and is usually differentiated from the motor vehicle lane by applying paint on the road.

Despite not having a physical barrier, these types of cycle lanes have a buffer marking the space of the bike lane, keeping it away from the adjacent motor vehicle traffic lane and/or parking lane. They therefore:

This is a road shared by cyclists and drivers with no access restrictions. Traffic speed is restricted to 30km/h.

This solution is possible when traffic intensity is low.

Bike lanes on the pavement.

In this case, pedestrians and bikes have shared use of the pavement, with a clearly signposted area reserved for cyclists.

The bike-pavement must be suitably marked to clearly specify the intended uses, especially at points of conflict. Cycle lanes running along the pavement are usually marked with paint and do not have a physical barrier. Planters or other visual vertical furniture are advisable, however, to segregate the different uses of the pavement.

These are streets with little traffic and low speeds, designated and designed to give priority to bikes. Signs, pavement markings, and speed control measures are used to discourage motor vehicle travel and create safe, convenient cycle crossings on busy streets. 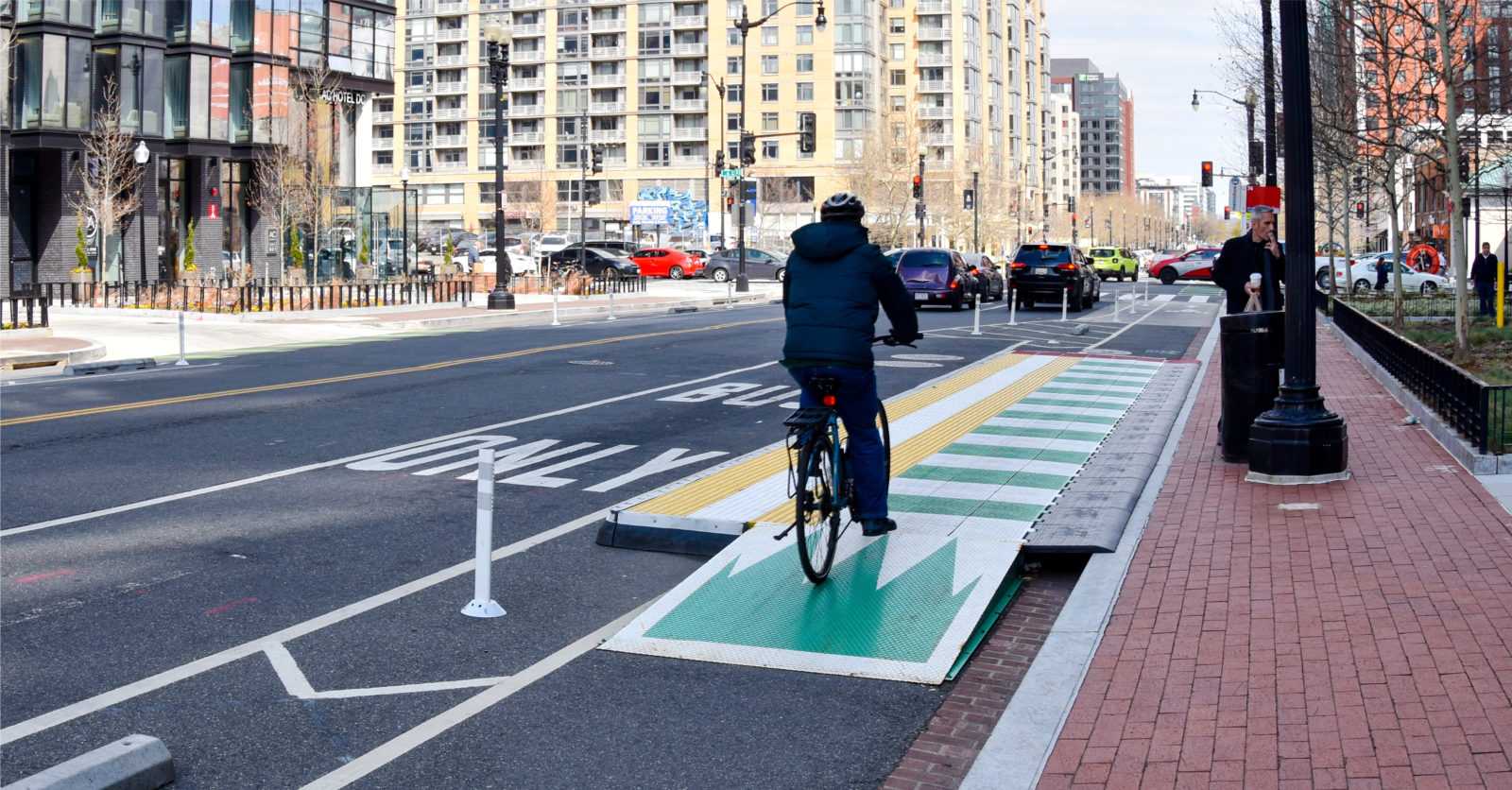