ZICLA’s Zebra® separators are part of the landscape of Barcelona. 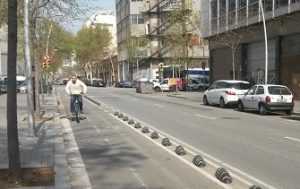 Barcelona is the city where we have installed more Zebra® separators since we began manufacturing them. Both, ZICLA and Zebra® separators were born in Barcelona, and it has been the first big city to include this product massively in its bike lane network.

In fact, if you go for a walk around Barcelona you will still be able to see some pieces of our first design protecting the bikes from the rest of vehicles.

10 years living in the streets of Barcelona is a key indicator to guess that the Zebra® separators resist the time standing with a minimum damage.

You will also be able to find scenarios such as the one in the heading. This picture is from Tetuan square in Barcelona, this location has a very intense traffic, there is a roundabout that joins two edges of the city: Gran Vía and Paseo San Juan. The Zebra®  separators were installed there in 2013 and they are standing there still today but decorated with some plants that have grown around them during these 5 years.

The project of the Zebra® Separators.

The Zebra® project promoted by ZICLA have the collaboration of a well-known designer from Barcelona Curro Claret. The aim of the project was to eco-design, develop and manufacture for ZICLA a cycle lane separator with no sharp edges. It needed to be highly visible with great resistance to compression, impacts and bad weather. It also had to be manufactured using recycled material and it also had to be recyclable.

The Zebra® separator has got the Catalan Ecolabel, which is an eco-labelling system that recognizes products and services that exceed certain environmental quality requirements beyond those established as mandatory by current regulations. The label has been delivered on the category of raw materials and products of recycled plastic.

Despite plants grow around Zebra® separators installed in the road, the Zebra® family has another model of separator that include the plants, it is known as the Zebra® planter. And it works to create a softer segregation barrier; it is very kind and visible when the bike lane is on the sidewalk or in a walkway where the pedestrians and cyclists share the same space.

The Zebra® planter by ZICLA in the International Design for All Foundation Awards 2017.