Zebra® bike lane separator, made of recycled plastic, has been installed on the greenways in Houston – Texas (USA) to protect cyclists. This initiative is part of an ambitious project to give Houston a vast network of protected bike lanes.

HOUSTON – Downtown Houston is getting greener, for cyclists that is. 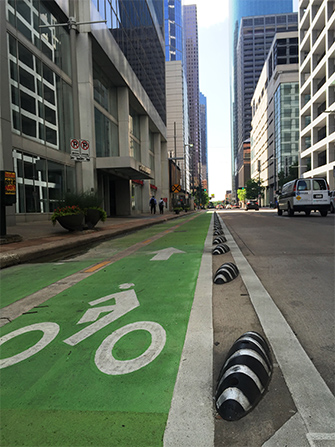 There are new green lanes for bikers, but not all cyclists think the project is going in the right direction.

“I’ve been riding my bike on the streets of Houston for over 20 years,” said Justin McMurtry, a cyclist.

This is his preferred ride.

“There’s definitely a demand for and a need for better accommodations for cyclists,” said McMurtry.

The city is working hard to make Houston more bike friendly. The proof is in the paint.

New green lanes are going in downtown on Lamar street to connect area parks, but McMurtry says there’s a problem. It’s a one way street and one of the bike lanes will go against traffic. 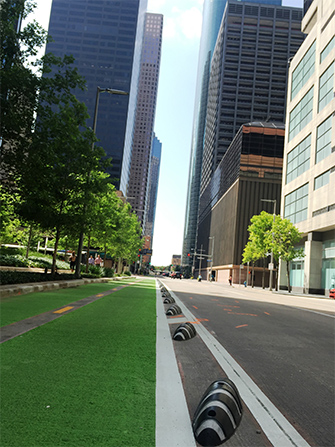 “When you introduce basically traffic coming from an unexpected direction, you create the opportunity for mishaps,” said McMurtry.

Houston’s already seen its share of bike fatalities. The city’s public works department says these lanes are designed to keep those numbers from rising.

“There is a zero fatality goal that the mayor has talked about several times and this is just one of the tools we are going to use to make it a little bit safer,” said Jeffrey Weatherford, City of Houston Public Works.

“Personally, I would have been a lot more comfortable if the east bound and west bound side were separated,” said McMurtry.

Design disagreements aside, this cyclist says the new green is a sign of progress.

“It’s exciting to see a high quality facility like this being added to the streets of Houston,” said McMurtry.

The project costs around $200,000. There are speed bumps built into the design to keep drivers from using the lanes.

The work is taking place on the weekends, so construction will not disrupt downtown businesses during the week.

The goal is to be finished by March.