The Department of Transportation of the City of Los Angeles (California) is testing the bike lane separator Zebra® by ZICLA  in its segregated bike lanes.

Today marks a very exciting step forward in our continuing effort to implement more cycletracks in Los Angeles. From 12-2pm this afternoon, we tested various cycletrack physical barrier options including armadillos and K71 bollards. As a refresher, cycletracks, also known as protected bicycle lanes, are on street lanes that separate people on bicycles from motorized traffic by physical barriers such as curbs, planters, parked cars, and posts.

They are a relatively new infrastructure that has become more and more popular around the nation. 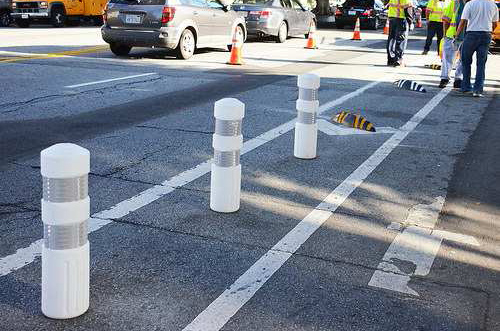 K71 bollards and armadillos in the buffer zone await bicycles, a sedan, a truck, and the ultimate test: the LAFD fire truck!

Starting at 9 am, LADOT crews began installation of the cycletrack test materials. The installation served as a test for all road users, seeking to understand the various interactions the different types of barriers will face in their everyday contexts. 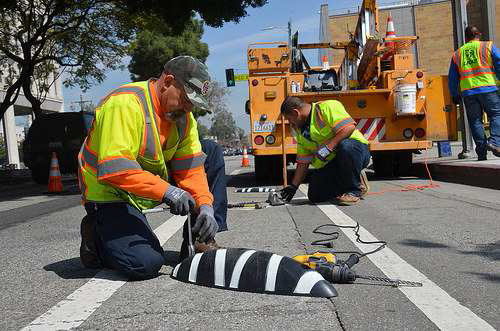 Around noon, City employees, Mayor’s Office staff, folks from LACBC and the City of LA Bicycle Advisory Committee helped test the barriers with their bicycles, observing their perception of separation as well as the mountability of the materials. 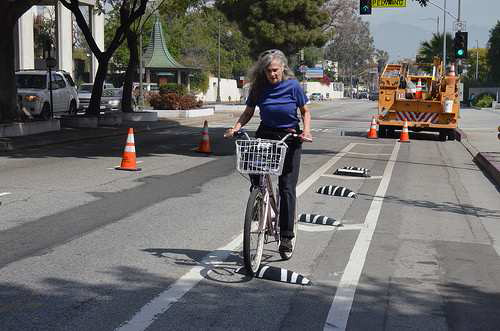 Testing ridability over the armadillos 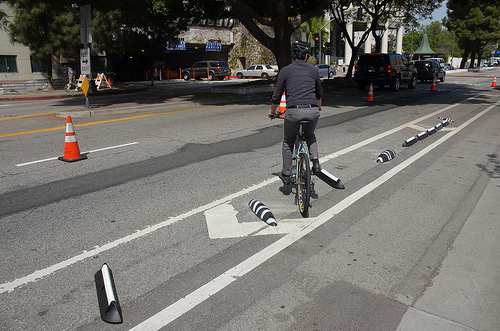 Riders tested the ease of leaving the lane in order to make a left turn, checking for adequate spacing

Then cars, trucks, and finally, an LAFD fire truck ran over the barriers from multiple angles and speeds. 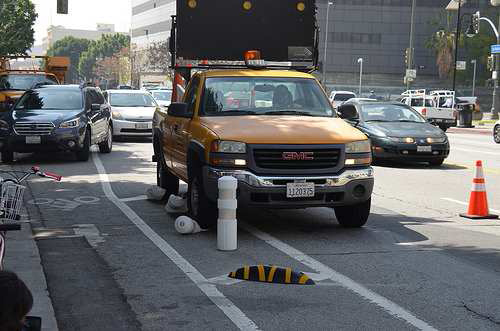 Bikeways engineer, Robert Sanchez, drives over the k71 bollards to test durability and how they withstand emergency vehicles entering and exiting the cycletrack 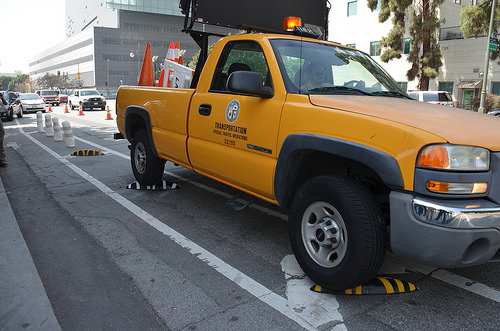 The truck continues over the armadillos, which like the k-71 bollards, remain fully intact

Since 2007, the number of protected bike lanes have doubled in the United States. An example from our own backyard is the 2nd Street tunnel, the first and only street in Los Angeles to feature physical separation. Currently entering construction, the MyFig project leads the way towards a fully protected in-road bicycle facility, but other locations are also considering less construction-heavy versions of the protected bike lane, specifically Los Angeles Street is being considered as a key connection to transit.  Because cycletracks offer a higher level of separation, they make traveling by bicycle a more attractive option for a wider range of people. In many ways, riding on these cycletracks can feel like riding on a bike path.

During the ongoing process of determining which physical barriers to use, we want to make sure to have a thoughtful, documented approach to testing these devices. Thus, on Los Angeles Street, we decided to test different configurations, with some segments featuring K71 bollards alone and/or in combination with armadillos. Additionally, we want to learn from other cities’ experiences to understand what has worked and what hasn’t. A few criteria that we want to use to judge effectiveness includes: deterrence from vehicle encroachment, emergency vehicle access and mountability, resistance to impact by vehicles, durability, maintenance, spacing, visibility, and exit and entrance safety for people on bikes. Washington D.C. used armadillos in a pilot program on Pennsylvania Avenue, creating a cycletrack in the middle lane of the road, but they proved unable to deter vehicles from making illegal u-turns through the median bike lane. To address this problem, the city is considering spacing the armadillos closer together. In regards to K71 bollards, we want to be aware of the possibility of them going missing or degrading too quickly, as was the case on Milwaukee Avenue in Chicago. Fortunately for Los Angeles, we don’t have to deal with snow and continually plowing the lanes during winter.

Next week, LADOT will be teaming up with the Department of City Planning to demonstrate a cycletrack at CicLAvia. The Pop-Up Chandler Cycletrack will take place on Sunday, March 22 at CicLAvia – The Valley. We invite community members and anyone rolling through to test the temporary facility and provide feedback. #PopUpChandler

As we continue to assess the results from our cycletrack tests and demos, gather recommendations, and assemble best practices from other cities, we would also greatly appreciate your feedback! Let us know what you think of today’s testing or other thoughts about cycletracks. Leave your comments here, send us an email or reach out on facebook or twitter.