Bicycle associations around the world are only too ready to brag about the benefits and enjoyment that cycling can deliver. So what exactly makes cycling worth your while? It’s simply the number of positive benefits it can bring you. It’s good for the environment with no dependence on fossil fuels to get around. Low cost relative to a car or bus ticket makes it extremely cheap as a form of transport. Owning and keeping a bicycle maintained is also a fraction of the cost of running a car. In large cities such as London many are switching to bicycles simply because they can navigate busy traffic much easier sparking a new craze for cycling. Not to mention the health benefits – exercise, fresh air, low impact on joints and muscles – your body also benefits. 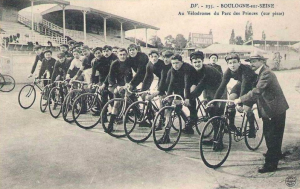 The bicycle has a history spanning generations, and a very interesting one at that. In 1892 the very first body was established for cycling. The International Cycling Association came about at the end of the 19th century as a result of the rising popularity of cycling as a sport, namely in the Olympics. The association made competition and classification of athletes more clear and fair. In 1900, this was succeeded by the Union Cycliste Internationale (UCI).

This ‘sporting federation’ based in Switzerland administrates rules, regulations and classifications of cycle sporting events and competitions. It is responsible for some of the major issues in modern cycling such as doping and disciplinary procedures. The UCI remains an important international cycling association to present but is not the only such organisation in the world. Similar bodies exist representing other continents around the world such as the ACC in Asia, CAC for Africa, COPACI in the Americas and other localised associations.

Today in a globalised world, international organisations play a larger role in overall cycling sport. The UCI remains one of the most significant. The main successes and achievements cycling has received from the existence of such organisations comes as they have created a standardised and fair environment that facilitates competition and overseeing of guidelines making a level playing field. Safety and wellbeing is promoted benefitting athletes and fans of the sport. Sporting achievement such as the UCI World Tour has popularised the sport and athletes. This global tour founded in 2009 sees the competing of 18 teams ranked according to various measures of performance.

Advantages of being part of a Cycling Association.

In the UK, localised body British Cycling is the main organisation concerned with cycling and the population. In the USA, there are more than a hundred of them, but one On national level the biggest is the Alliance for Biking and Walking (ABW) also known as the North American coalition of local and state bicycle and pedestrian advocacy organization. Each state has one or several organisation such as the San Francisco Bicycle Coalition that Zicla joined recently. Becoming a member allows anyone from amateur to professional cyclists to stay up to date with the latest sporting news in the sport as well as find local cycle clubs. Joining local events and training programmes are one of the most attractive elements of membership. Member benefits include liability insurance for cyclists during their trips be they commuting or competing. Lower cost bicycle schemes are exclusively the benefit of British Cycling members. Magazines and ticket sales for cycling events are perks of being a part of the community. Repairs and advice on keeping your bicycle in good shape are one of the greatest benefits even to the amateur cyclist.

Many organisations like British Cycling or ABW exist around the world in their respective countries. The benefits are like-for-like. So if you have decided to get involved in cycling for commuting, fitness, competition or anything in between it’s a great idea to find out more about your local cycling organisation and the member benefits awaiting you. They are full of experienced and friendly representatives to help you with your every question and offer tips to get the most out of your cycling experience.

Join the increasing millions around the world enjoying the bicycle as part of a modern healthy lifestyle. It is one of the most unique hobbies given all the advantages to be had from riding the bicycle.