Esplugues de Llobregat and Barcelona better connected than ever by a bike lane.

The Barcelona Metropolitan Area presented the Bicivía project in 2016: a network of main metropolitan cyclable routes intended to connect the conurbation quickly, directly and safely from north to south and east to west.

Until this stretch of Bicivía was built, the only way of getting between Barcelona and Esplugues de Llobregat was to use a car or public transport because it involved crossing Diagonal, a road with very heavy traffic for using alternative non-motorized transport. The stretch between Esplugues de Llobregat and Barcelona – the principal section of one of these cyclable routes – has been operative since March 2018. 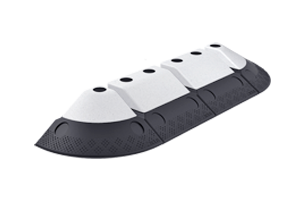 Although much of this bike lane runs through an interurban zone, there is a stretch within Esplugues de Llobregat. Module A of ZICLA’s Zipper® system has been used to segregate it.

Results of the project.

The new cycle lane was a success from the beginning: 73,698 bicycles were ridden along the route in the three months after it became operational, the equivalent of 752 bikes a day.

These figures have encouraged the metropolitan area authorities (AMB) to continue working on this type of project to achieve its aim of connecting Barcelona’s metropolitan area with bike lanes, reducing air pollution and improving air quality.

END_OF_DOCUMENT_TOKEN_TO_BE_REPLACED

In Barcelona, Dr. Fleming Street bike lane has been moved to the roadway, returning the sidewalk to the pedestrians.