Carrer del Marroc in Barcelona has a new bike lane with the new Zebra® | Zero separators from ZICLA.

Carrer del Marroc in Barcelona is a road that has recently been developed. It is in the northern part of the 22@ district, a booming area thanks to the construction of apartment blocks and offices. Barcelona City Council has provided this area with a modern cycling infrastructure to cater for the district’s new residents and workers.

Barcelona City Council has implemented an ambitious urban development scheme in Carrer del Marroc between the end of 2018 and the beginning of 2020. It included the urban development of three stretches interrupted by old buildings and disused premises between Carrer Josep Pla and Carrer Puigcerdà in the Poblenou district. This action was included in the Special Infrastructures Plan for the 22@ district.

This area of the city is the scene of increasing economic activity and the mobility needs of the district’s new workers and residents have led to the incorporation of a modern infrastructure for bikes. As a new road, it incorporates top-level design criteria, such as wide pavements, rest areas, quality lighting and a separated cycle lane segregated from other traffic. 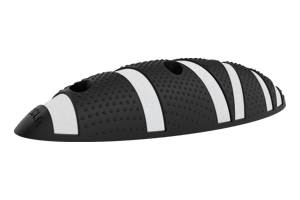 As a new road, it has incorporated top-level design criteria, such as wide pavements, rest areas, quality lighting and a separated cycle lane segregated from other traffic with Zebra® 13 | Zero separators to improve user safety.

These new separators are manufactured with 100% recycled postconsumer plastic, making it possible to drastically reduce their environmental footprint.

The Zebra® family Zero line consists of the following separators: