The Pedralbes district of Barcelona becomes a cycling area.

In recent years, Barcelona has increased the extension and safety of its network of bike lanes and is still planning to extend the current kilometers to make the city one of the reference points for sustainable transport. All these actions were included in the Pact for Urban Mobility (PMU) 2013-2018 that the city promised to carry out and that it hoped to increase the use of the bicycle as a means of habitual transport. The goal was to reach the conditions on the road so that the number of bikes could increase in the city, and to do so safely, without interfering with other means of transport.

Need and objective of the project.

The project of the street of the Gran Capitán was enrolled in the macro project that sought to improve the cycling connections between the neighborhood of Pedralbes and the Av. Diagonal of the city of Barcelona. 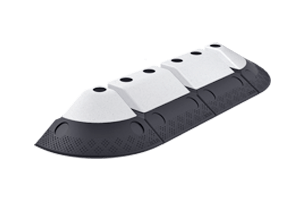 In the street of the Gran Capitán (between the Avda. del Ejército and the Sor Eulalia de Anzizu Street) a new two-way bicycle lane was implanted on the side Llobregat of the road and the existing lighting was renewed. To protect cyclists, modules A of the ZICLA Zipper® system were installed. In one part of the route, a double line of modules of the Zipper® system was placed to reinforce the protection due to the high slope of the street and the risk that vehicles could move through it at high speed.