The City of Modesto, California, applies a road diet by using Zebra® separators.

Historically, streets have been designed to prioritize the movement of vehicles, and only recently has it become widely accepted that the areas where this has been done usually offer lower safety standards as a result.

In this context road diets have emerged as a way to rebalance the way we allocate space in our auto-centric streets to support means of transportation and human activities that go beyond just moving personal vehicles.

The original design of College Avenue in the city of Modesto, California, prioritized automobiles. The width of this street made the car drivers go at speeds too high to allow safe coexistence between cars, pedestrians and bicyclists.

City officials decided to apply a road diet to reallocate the space on this street and open it up to uses and forms of transportation beyond moving car traffic. The new design includes a roundabout, pedestrian refuges and an integrated bike lane (in this scheme, bikes share space with other vehicles).

This consisted of installing a roundabout, several pedestrian refuges and a chicane at the intersection between College Avenue and Stoddard Avenue. These elements help reduce the speed at which cars drive at this area, increasing safety for all the street users, including bike riders and pedestrians.

For this purpose, the city chose Zebra® 13 separators to create this new street configuration. The separators were arranged in the following way: 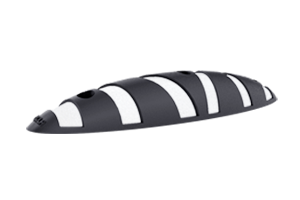 Zebra® separators are an entirely recyclable product made with recycled plastic. They are highly durable, offering very good visibility. They are also an element for channeling traffic and allow rainwater to flow across them, while cyclists can leave the bike lane whenever necessary.