Passeig Pujades bike lane in Barcelona: an explosion of color.

Barcelona is adapting its urban space to distribute it more equitably among the different modes of transport, opening up circulation spaces for bicycles, improving the bus network and giving priority to people traveling on foot by expanding sidewalks and bringing in traffic calming to offer comfort and safety. The extension of the network of cycle paths is one of the City Council’s key measures to achieve this adaptation. The goal is to increase the kilometers of bike lanes substantially so that 95% of the population of the city has at least one bike lane less than 300 meters away from home.

The objective of the project was to continue the horizontal axis that connects the District of Sant Marti with Ciutat Vella. It was important because one of the oldest lanes in the city, which had generated a great deal of conflict with pedestrians, was disappearing. This was the lane running on the sidewalk along the wall of Ciutadella Park as far as its access.

The proposed solution was the construction of a segregated bike path through the center of the promenade using Zipper® system modules. This system is modular and its modules can be installed continuously or discontinuously, allowing multiple configurations to be built. 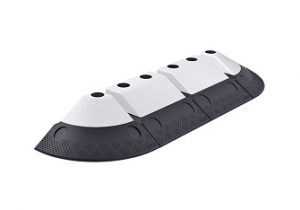 The main characteristics of the Zipper® system are:

A carnival of colors. 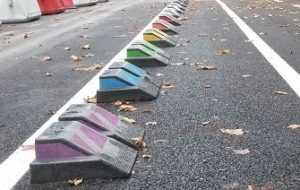 In the Passeig Pujades project, the City Council decided that the modules of the Zipper® system should be painted in different colors to reproduce the color pattern of the rainbow

The Lisbon City Council is expanding the bike lane network to face the COVID-19 challenge.