San Jose, in the state of California, is the capital of Silicon Valley: one of the regions that lead innovation in new technologies internationally. This is a rapidly changing environment. Citizens are very aware of the challenges posed by climate change and aspects such as sustainability in daily journeys, the importance of reducing the environmental footprint and the need for a drastic change in the mobility model, avoiding or at least reducing private car use.

The number of residents and workers in downtown San Jose is expected to double in the next five to ten years. As part of the growth strategy without congestion, the city of San José created a multidisciplinary and interdepartmental team to develop and carry out the “Better BikewaySJ” project.

This ambitious project has converted the streets of San José into a network of protected bike lanes using the NACTO methodology. It is the first notable attempt in Santa Clara County to redesign the streets quickly, innovatively, and using modular materials.

Better BikewaySJ aims to make quality public spaces on the streets that allow citizens to cycle safely. The extension of the cycling infrastructure network was a challenge of integrating the bus stops and the newly created bike lanes in those sections of the road where the bus stops coincide with the bike lanes. 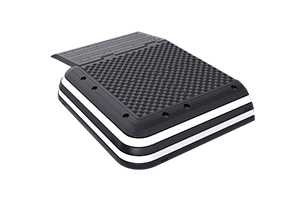 This consisted of the installation of nine ZICLA Vectorial® system platforms. The location of these allows compatibility of the bike lanes and bus stops. Its configuration is as follows: