The Los Angeles Department of Transportation (LADOT) is working to increase safety at Avalon Boulevard.

Needs and objectives of the project.

This section of the boulevard is one of the deadliest of the city of Los Angeles. Between 2009 and 2019, 149 people were involved in severe and fatal collisions in this area. 44% of these people were walking or riding a bike. In the framework of the Vision Zero program, the Los Angeles Department of Transportation is making an effort to increase safety at Avalon Blvd, intending to protect lives and avoid severe accidents.

As part of the street reconfiguration, the Los Angeles Department of Transportation decided to reduce travel lanes from two to one in each direction. And they built a bike lane on each side of the street. But this new configuration of the street made the bike lane coincide with some bus stops of the boulevard. 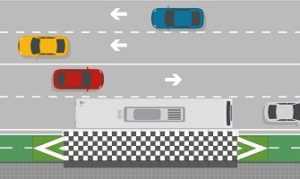 In all the cases, the configuration chosen was the Shared Cycle Track Boarder. The platform is connected to the curb and has a ramp to the road on each of the edges. They allow the cyclists to continue their ride over the platform without dodging the Vectorial® system platform. At the same time, it creates ADA compliant access to the bus. It also facilitates the buses’ approaching the bus stop, avoiding bus users to expose to traffic to board the bus.