In recent years, the city of Pau and its metropolitan area have embarked on the creation of a number of cycling facilities, included in their Cycling Plan. In the context of the end of the lockdown due to COVID-19 of May 2020 and to avoid agglomerations in public transport, Pau and its metropolitan area have decided to promote cycling by developing 7 km of segregated bike lanes.

Many bicycle lanes do not always guarantee good travel safety, due to the lack of physical separation of motor traffic. The city of Pau and its agglomeration aim to develop a high-quality and safe cycle path infrastructure to encourage as many cyclists as possible to use the cycle path network. Once completed, it should reach 100 km in length in Pau and its entire metropolitan area. 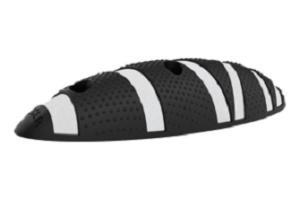 To achieve these safe infrastructures, the choice fell on the bike lane separator Zebra® 13 | Zero which by its height, is a deterrent for vehicles, as well as its high visibility thanks to its retro-reflective bands and accentuated by an oblique positioning on the road. Resistant to shock, it is made of 100% recycled post-consumer plastics so it is a product that improves mobility and safety in cities with a minimum environmental impact.

The separators were initially installed on the avenue du Général Leclerc, as well as on part of the avenue du Général de Gaulle and the boulevard du Commandant René Mouchotte, waiting for other facilities, in particular in the corridor Alfred de Musset. Thanks to these developments, the city of Pau ranks second among the cities of 50,000 to 100,000 inhabitants with 1.30 km of cycle paths per 1,000 inhabitants, compared to 1.35 km in La Rochelle, which ranks first.

This installation of Zebra® | Zero is the first to be carried out in France and since its completion, a drop in the speed of motor vehicles has been observed in the sections where the bike lane is located. The local cycling association Pau à Vélo also conducted an initial assessment of these developments through an online survey and a field survey of cyclists. To the question “Do you prefer a design with separators?“, 77% of respondents responded in the affirmative, confirming the goodness of the choice made.