Home / Blog. / TOPICAL / Cyclists and pedestrians together can get more livable and friendly cities.
< PREVIOUSFOLLOWING >

The tranquillity of streets in a city and the generation of smoke-free spaces from exhaust fumes is one of the ways to make cities more livable and more friendly. The widespread use of bicycles in the city clearly contributes to the tranquillity but its growing prominence has generated conflicts with pedestrians who see bicycles occupying spaces, that previously belonged exclusively to them.

This has generated a debate in which voices that propose to implement a series of measures such as:

The Bicycle Club of Catalonia believes that these measures will not solve the problem, as has been seen in other European countries. His spokesman, Carles Benito, ensures that with this type of measures the only thing that would be achieved would be to discourage the use of this vehicle, and this would be unfavourable for all citizens, regardless of the means of transport they use. For this reason, the Bicycle Club of Catalonia is committed to seeking consensus and facilitating dialogue and understanding between cyclists and pedestrians.

The elimination of sources of conflict between cyclists and pedestrians.

One of the most frequent conflicts between cyclists and pedestrians occurs when the bike lanes go along the sidewalk, but in the case of Barcelona, the city council is already working to move this type of path to the road, as it has done recently on Paseo Pujades, where the pedestrians have completely recovered the sidewalks.

Sometimes the coexistence of cyclists and pedestrians is the only way and in Zicla we help to achieve it. 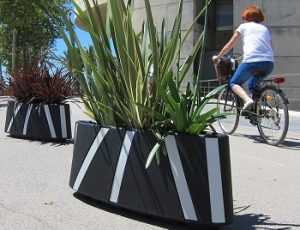 t Zicla we ideally think that each group should have has its own space, so we think that whenever possible, it is very important to completely return the sidewalks to the pedestrian.

But there are times when there is no other solution that both groups, pedestrians, and cyclists coexist in the same way. For that reason, in order to offer solutions to create safe infrastructures for both, we developed the Zebra planter that allows generating a soft, friendly, and very visible segregation. Zebra planters are large and highly visible planters that can be stacked, offering different final heights and that if the plants are chosen correctly, require very little maintenance.